Spending the weekend in New York City to record an episode of Stray Dogs, I went and saw a matinée performance of The 39 Steps. Based on an early Alfred Hitchcock film, this show re-imagines the story as a sort of high-concept comedy, with four actors taking on the roles. Actually, it's one actor in one part, a woman playing three characters, and two other men (listed as just Man #1 and Man #1 in the program) playing countless other people, male and female, throughout the play. I knew it was a comedy. I knew it was Hitchcock. But I didn't know I would laugh as hard as I did.
The very first sequence of the play hits the theme of the show perfectly, as we get a straight-faced performance of a side-splitting monologue, as the intrigue/adventure plot is off and running. In addition to wordplay and clever references to other Hitchcock films, the play is solidly rooted in physical comedy. All four actors use their bodies fantastically, both to create character as well as find humor. There is a sequence where the leading man climbs out of a train car, then across the roof, and then climbs down a bridge. The whole sequence was beautifully rendered on stage, as well as being hilarious.
Since I am in the process of writing comedic scripts based on film noir detectives, The 39 Steps was a great bit of inspiration for me to write some more comedy detective stories. The show also did a great job of blending the comedy with the actual mystery, and that's a lesson that I want to be sure I take into the Boson Higgs episodes. Comedy and plot don't have to be exclusive of each other. I might also steal a few of the jokes from the show. They say the sincerest form of flattery is imitation, and I really enjoyed the show. I recommend it highly, and it made me start itching to sit down and write again.
Posted by Nick at 11:03 PM No comments:

Folks, surf on over to www.radiohoundproductions.org and check out "Lesson Three," the tenth episode of The Stray Dogs Project. This series has now been on schedule for 18 weeks, and I want to take a second to thank all the actors, directors, writers, and producers who have helped out since we started this in February. We have some exciting projects coming up over the summer, so stay tuned for those.
Here are some pictures: 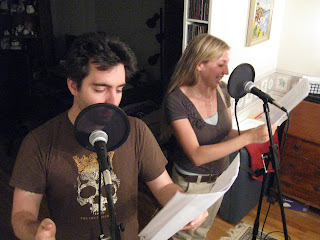 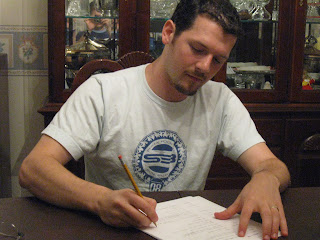 Director Adam Danoff takes a note on the script. 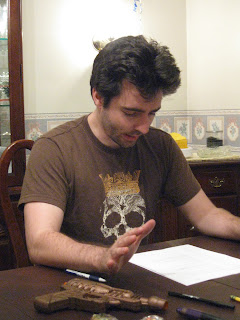 Over the last few days, I have been sitting in a new desk chair at my desk. Listening to music and podcasts, I've had a lot of business work to do. From writing 6(!) different scripts and treatments to scheduling the last-minute recording session for our newest episode, it's been a lot of desk work lately for my career/business. It's very hard to motivate myself to work from home a lot of the time, so I've recently instituted a policy of "office hours." I hold myself to a schedule as if I were actually at an office job, sitting at the computer and working on the different projects I have to do. I close down all my Internet tabs, turn off the TV, and just listen to some generic rock n roll as I write for at least an hour or two every morning. I finished a short film like that last week, and I'm rolling along on a feature film synopsis.
It's a challenge to keep these hours up, especially when the idea of either sleeping in or goofing off is so much more appealing than sitting in front of a computer working on my daily script pages. But writing involves muscles just like every other endeavor, and those muscles are improved through exercise. The new desk chair is making my desk a much more pleasant place to be, and I'm excited to go to work each morning.
Posted by Nick at 10:12 PM 2 comments:

Folks, my newest article has been published in Backstage, both the magazine and the internet version. Check it out at this link:
http://www.backstage.com/bso/advice/brave-beautiful-new-worlds-1004095484.story
Posted by Nick at 3:33 PM No comments:

For the last three days, I was downtown at a casting agent. Three different auditions, over three subsequent days, and I even parked in the same spot on the street two days in a row. One audition was for a medical training video, which required that I review and sign a release form saying that I understood the language might be "graphic, yet professional." They also discussed the idea of possibly filming "invasive procedures," or appearing in the video "fully nude." I had just faced the decision about nudity-for-art's-sake, so I was prepared to sign the paperwork saying that I was only interested in "non-invasive, clothed roles." Seriously, there was a box to check for that option. And this wasn't even a posting on Craig's List, or something that would show up on Nudity Required, No Pay. A friend runs the blog, go check it out.
The other audition was for a commercial for a used car company. The ironic thing, of course, is that it's the same company where I actually bought my used car. ("Not only am I the president of hair club for men....") Even though the casting agent had sent us a script, the first audition was a mostly-improvised scene where we had to riff on the story in the script. I worked with a great guy in the scene, and he and I had a lot of fun working together. After hitting the comic book shop (The Spirit #1 in the dollar bin!), I got the email from my agent that I got the callback for the audition. Which meant I had to go back to the office two days later for another read.
Arriving at the office on Thursday afternoon, there must have been thirty people there waiting in front of me. The director had apparently been taking his time with the auditions, and the casting director was trying to hurry him up, but I still got scene about an hour after my scheduled appointment time. Callbacks normally have fewer people than the original audition, but this time was a huge change. Lucky for me, I saw a whole bunch of people that I knew, and I really enjoyed the extra time to catch up with them before we went into the room to audition.
In the audition itself, the director gave me a whole bunch of notes and had me do it a few times. Walking back to my car, I know exactly the next step that my career needs, and that is a class on acting in commercials. I have tools to work in theatre, and I'm getting the tools to work in film. But what I need now is some commercial-specific training so I can really be confident when saying lines like "Are you kidding, this is from Car Sense" or "I use Dragon.com, and you should too." It takes certain skills to pull those lines off, and that's what the class can teach me.
Posted by Nick at 11:51 AM No comments:

(Okay, first let me say that I'm very sorry that two whole weeks have gone by between blog posts, and that the last post and this one are almost exactly the same. But, that being said...)
Check out the newest episode, now online! Surf on over to the RHP homepage to check out the newest episode of The Stray Dogs Project - "Recruitment Drive." Clink the link, then go to the Projects tab, and select Stray Dogs Project.
Here are some pictures from the recording. We have two somewhat posed shots this time around. First is Rob as Evan. 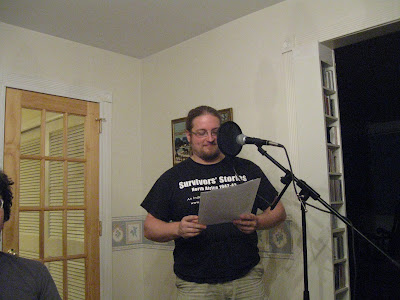 And then Katie taking a break from recording the role of Rachel. 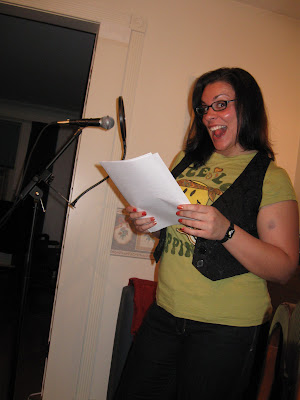 A scene of the table reading with Katie and Rob, as well as director Andrea Pinyan. 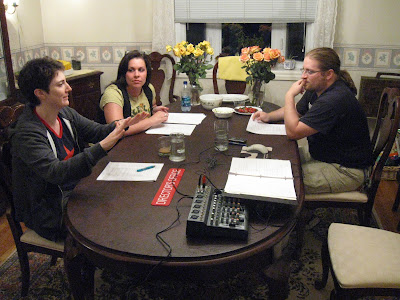 And finally, a picture of me as I explain microphone usage. I swear this photo wasn't posed, even though it looks like it could have been. 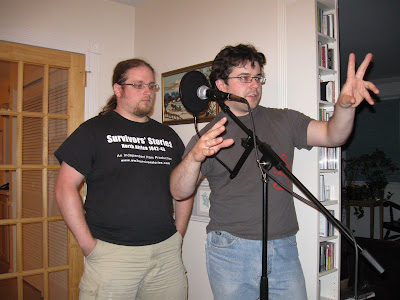 This episode is the ninth in the series, and our next episode will be online in two weeks, just in time for Father's Day. Stay tuned.
Posted by Nick at 7:57 PM 3 comments: