Sitting on the couch next to me is a signed copy of Justice League #1, the first comic book released by DC Comics as a part of their company-wide relaunch. If you haven't heard, DC has completely re-branded their line of comic books, starting every series over with a new #1 issue. Many characters (Superman included) are getting an all-new backstory, history, costume, everything. They are hoping to reinvigorate their comics, as well as grab new readers. And in a post in May, I laid out the circumstances that would bring me back to monthly comics. In that post, I challenged DC to put out something that I wanted to buy, and now they have. So I am there. I subscribed to my books today at my local LCS.

And now, with the first step of the DCnU in my hands but still unread, I'm still excited. Are there some press releases that make me nervous? Yes. Do I think I might be switching to the trade paperbacks in a year? Maybe. But do I think they have "ruined" Superman with this move? Not at all. Comics are a fluid medium, and the Superman from two years ago bears almost no resemblance to the Superman from the 1940s. So the changes don't really scare me. I'm ready for them. Hell, I'll even buy the action figure! (That costume is growing on me...)

What I'm worried about are the stories. If they are good stories, well-told and captivating, then I will be a part of the series. If the stories aren't compelling, then this will seem like a publicity stunt to attract attention. If the writers and creators use this opportunity to capture a new spirit of adventure, it will be perfect. But with Geoff Johns involved, I'm afraid that the "new" universe is going to be largely derivative of the old one. But if these stories and books keep the feel of the characters while giving them a whole new coat of paint, I'm in. To me, at this point in DC history, the worst thing for these books would be if they merely recycle the old material and try to pass it off as something new.

Well, time to break the book out and see which way the nU goes.... 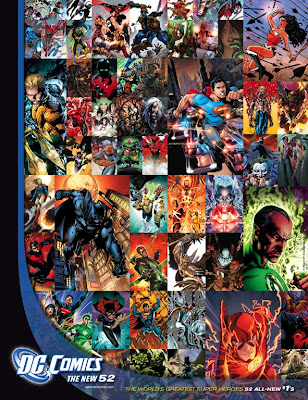 Since I now work for a publishing house, I want to start including books reviews and discussions on this blog as well as movie and theatre reviews. Those posts will continue for sure, but I'm also branching out and tackling fiction, non-fiction, comic books, and whatever else I get around to reading and writing about. First up, a recent release that I received while I was studying at NYU. I didn't get a chance to read it until the program ended, but I'm glad I made the time to sit on the couch, drink a beer, and read this new Bond novel. "Reboot" has become a dirty word when referring to recent films, but this is an excellent "reboot" of the literary James Bond.

This is a very enjoyable book. I grew up watching the Bond films, and I read all of Ian Fleming's original novels. "Carte Blanche" is a great way to update the Bond series and bring 007 into the 21st century, and there are even rumors that this book might form the basis of the next Daniel Craig film. I'd be all about that, especially since this book is a lot better than Quantum of Solace. Ultimately, I was up late at night reading as much of the book as I could, and that is the best recommendation I can give it.
Posted by Nick at 3:00 PM No comments:

A review, in bullet-points

Before I headed into the theatre, the only thing I knew about Captain America was that there would be trouble when Captain America throws his mighty shield. I didn't know exactly what that trouble was, but anyone who throws a shield at me is going to get me to yield rather quickly. I'm a little late to the party where this movie is concerned, but since it was directed by Joe Johnston, who also directed The Rocketeer, I was on board for some old-fashioned action adventure fun. And I didn't know how right I would be!

Things I loved:
Things I liked less than I expected:
The less-would-have-been-more file:
Things that seemed on-loan from another movie:
Overall:

Now that I am an aspiring professional in the publishing industry, I receive several newsletters discussing the state and future of the business. The recent issue of one of them contained a link to this story, in which Bethanne Patrick discusses her recent guilt over vulturing the sale tables at Borders liquidation sales. I know that I'm guilty of this as well, as I've been wandering past those stores much too often looking to see if they've offered any new discounts since I was there two days ago. (Usually not.)
Patrick questions how much we can possibly value books, if we are willing to do so much to avoid paying for them. I know I am also guilty of this little problem, choosing to purchase books online or in used condition rather than pay full-price for them. I have shelves and shelves of books that I bought a library book sale (3/$1) that I've never read, nor never plan to read. And so reading this article made me think about my own book-buying habits. Maybe I can take her advice and give up the latte to buy a trade paperback. I know I'll make the sacrifice necessary to pick up some comic books in September, so I'm sure magazines and new books are worth my money too. Once I have the income to spread around, I'm looking forward to using that money to support the things I enjoy. The hosts of the very entertaining movie podcast "Better in the Dark" always encourage people to vote with their dollars, and I will do the same. As soon as I have some dollars.
Posted by Nick at 9:56 PM No comments: